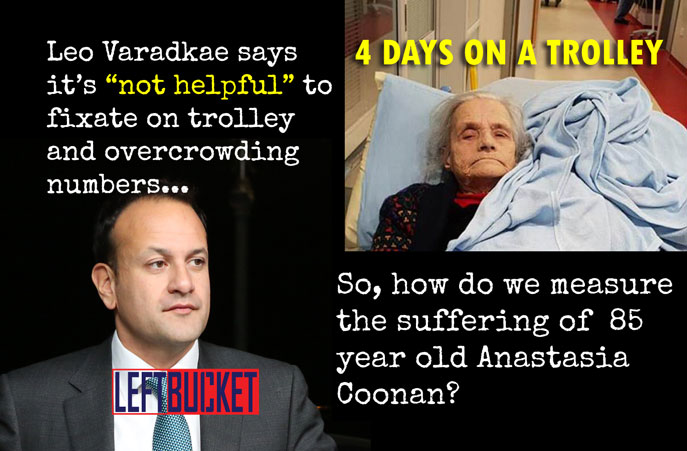 Just one day after Leo Varadkar told us it was “not helpful” to fixate on trolley and overcrowding numbers, Anastasia Coonan, an 85-year-old grandmother, started a four day ordeal on a hospital trolley at University Hospital Limerick’s state-of-the-art emergency department. She was one of 230 people on trolleys in Limerick that day, one third of whom were over 75 years old.

Anastasia was admitted with a suspected stroke and was cared for in A&E for her duration there by her daughter Mary Mockett and her granddaughter Katie Sheehan. We are glad to report that Anastasia is home now and recovering from her physical ailments but she and her family are still traumatised by their inhumane treatment by the HSE and the Minister for Health. Front line medical staff were wonderful and did their best in horrific working conditions. Her family had to resort to Social Media to try to draw attention to the dreadful plight of Anastasia. Her daughter Mary Mockett posted on FaceBook at https://www.facebook.com/mary.mockett  while Anastasia’s granddaughter Katie posted on twitter

@SimonHarrisTD my 85 year old grandmother after a stroke!!!! Day 3 on a trolley parked in front of a isolation room in A&E, that in itself is a massive risk for a woman of her age! Mr Harris! why is this problem still a massive issue! Even after the opening of the new and A&E?? pic.twitter.com/Q0Eg00Q5A4

Mrs. Coonan and her family unfortunately are just a small sample of the many suffering in Irish hospital Emergency Departments. So far in the month of April 2018 over 3,000 patients were in a similar situation.

Contrast Varadkar’s outrageous statement telling us that focusing on overcrowding numbers was “not helpful” with his statements in the recent past and consider, is Varadkar an idiot, a liar, incompetent, unstable or a dodgy politician?

The Herald.ie  on the 29th September 2015 quoted:
“Leo Varadkar warns ‘heads are going to roll’ if trolley crisis is not resolved soon”

On 5th Oct 2015, RTE reported:
“Varadkar meets nurses and urges for focus on ‘solutions’ to emergency department overcrowding”  and went on to state that the Minister for Heath, Leo Varadkar, affirmed that “…he knows exactly how bad the situation is but the focus has to be on solutions.”

However, Varadkar now deems it unhelpful to focus on overcrowding and trolley numbers in Emergency Departments! Meanwhile, Brian Hamilton, 41, was discovered slumped DEAD in a chair in Tallaght Hospital A&E waiting area. He had turned blue by the time he was found by staff and it is thought he had been dead for FOUR HOURS. And Varadkar says now it’s “NOT HELPFUL” to focus on overcrowding.

We need to support Anastasia and all the others mistreated in our hospital’s A&E Departments as well as the heroic medical staff struggling to care for them. There must never again be a Brian Hamilton who dies, unnoticed for four hours, while awaiting attention in our Emergency Departments. We need to highlight and constantly publicise this continuing humanitarian crisis until the horrific suffering of the sick and vulnerable is finally ended. This is a National Emergency and our so-called government is trying to hide the truth from us.

Please contact us with your personal experiences in A&E. Help end the suffering and abuse and DEMAND action from your local politicians, public representatives and HSE management.