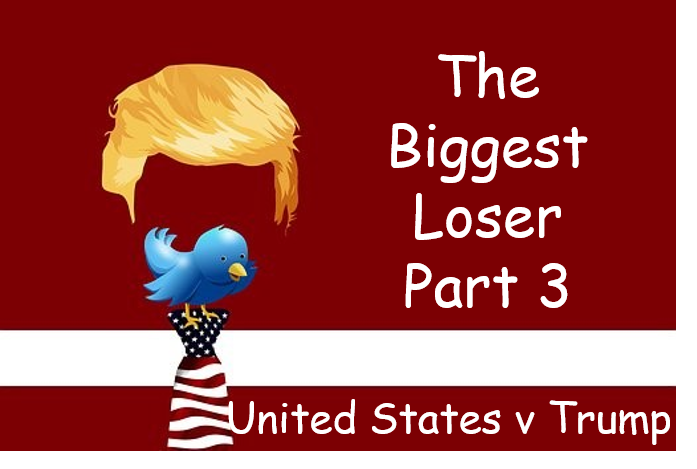 Trump’s vow to ‘fight all the subpoenas’ reflects exactly the behaviour that was the basis of the third article of impeachment against Richard M. Nixon. It is an even more naked attempt than Nixon’s to sideline the body whose constitutional job it is to provide the check in checks and balances. Recent communications from both the president’s personal counsel and the White House counsel—though it’s hard to detect a difference between the two, as Barr continues to do what he promised: to put the president above the law—go further than the Department of Justice ruling that a sitting president cannot be indicted. They argue that in addition, he cannot be charged, and cannot be investigated. If any legal body—Congress, for instance, or the FBI—should mount an investigation that the president determines is unfair he can shut it down. Just like that. As Barr sees it, Trump really could shoot someone in the middle of Fifth Avenue, and nobody could touch him for it.

Pessimistically: Trump’s strategy is simple: as he said ‘If the partisan Dems ever tried to impeach, I would first head to the U.S. Supreme Court’. He would head over there by way of those same courts that he and the Republicans in the Senate have been stuffing with hard-right judges, and by stonewalling all subpoenas from Congress. Should he get to the Supreme Court, and should Gorsuch and Kavanagh live up to his expectations, he would effectively have rendered redundant the US House of Representatives and its constitutional function—that is specifically to conduct investigations to oversee the executive branch, to hold hearings to inform the legislative process, and to serve as the voice of the people and the states in the federal government.

Without Congressional oversight of the executive branch the president is his own boss, above the law, and answerable to nobody. As CEO of Trumpamerica Inc. he could assume absolute power and bully everybody into satisfying his every whim. That’s what we would call a coup.

Optimistically and realistically: Trump’s ignorance of the US system of governance is misleading him once again. Congress and not the Courts is responsible for executing the impeachment process. The judiciary can neither allow nor refuse to allow the legislative branch to do its job. Even if he succeeds in getting individual cases to the Supreme Court, I am assured by people who know these things that the US system is robust and can withstand this onslaught, citing precedents that the would-be Emperor should read very carefully.

OK, so that’s not going to happen. Maybe if we could get Fox news to broadcast them?

Jamelle Bouie, in The New York Times argues that

Trump’s move to refuse all oversight is arguably tantamount to rejecting Congress’s coequal status, similar to the tyranny denounced by Representative Benjamin Butler during the 1868 impeachment of Andrew Johnson, during which he accused the president of ‘intending to set aside the rightful authority and powers of Congress.’ (nytimes.com here)

Richard Nixon made similar assumptions to Trump’s in his attempt to block the subpoena ordering him to hand over the White House tapes. He was right in his assumption that the tapes would be fatal to his presidency. He was wrong, however, in his assumption that ‘his’ Supreme Court—to which he had appointed four of the nine sitting Justices—would legislate on partisan terms. They ordered him to hand over the tapes, leading directly to Article 3 of his Impeachment, quoted above. His presidency was effectively over.

‘His’ Court also held that presidential privilege is not absolute and that a president’s interest in confidentiality must be balanced against the interest of the branch issuing the subpoena. A claim of presidential privilege not based on military, diplomacy, or sensitive national security secrets does not supersede Congress’ right to all evidence that is relevant to its investigations.

Trump’s stonewall is already breaking up in the courts. As Rachel Maddow points out, the dam was breached by a number of legal rulings in favour of the Congressional Committees during a two-week period in May. (msnbc.com/rachel-maddow-show)

Those recordings include Mike Flynn’s secret conversations during the Trump transition with Sergey I. Kislyak, about the possibility of Trump lifting sanctions imposed by Obama in response to Russia’s attempt to interfere with the US electoral process. Flynn had originally said there were no such conversations, but subsequently pleaded guilty to lying to the FBI about them.

The government is FURTHER ORDERED to file on the public docket . . . an unredacted version of those portions of the [Mueller] report that relate to Mr. Flynn.

The Court concludes that plaintiffs have not raised any serious questions going to the merits. . . . It is well settled that the committees possessed the power to issue and enforce subpoenas of the type challenged by Plaintiffs. . . . [I]t is not the role of the Court or plaintiffs to second guess [the committees].

He pointed out that ‘while the president, his family and his business would suffer irreparable harm from disclosure of the records, they were “unlikely to succeed on the merits” with their argument that the congressional subpoenas are improper’.

In accordance with Judge Sullivan’s ruling, the Justice Department has made available in full what Rachel Maddow called the Mafia-esque voicemail recording from Trump’s now-former lawyer John Dowd to Flynn’s lawyer. They have, however, refused to comply with the judge’s order to produce the unredacted portions of special counsel Robert Mueller’s Report that had to do with Flynn. They argue that

Which is not quite the same as saying that there is nothing else that had to do with Flynn in the Report.

They have also refused to produce the transcripts of those wiretapped conversations between Flynn and Russian officials.

The government further represents that it is not relying on any other recordings, of any person, for purposes of establishing the defendant’s guilt or determining his sentence, nor are there any other recordings that are part of the sentencing record.

Those highly classified transcripts have become the Schrodinger’s cat of American jurisprudence. The government ‘represents’ that there are no ‘other recordings that are part of the sentencing record’, even though Flynn pleaded guilty to lying to the FBI about precisely those telephone conversations with Kislyak, formerly Russia’s top diplomat in the United States. This would seem to establish their existence and simultaneous non-existence as stated by the government. And even if they did exist, though they don’t, the government is not relying on them to make their case—though it’s hard to conceive of anything more relevant than those transcripts ‘for purposes of . . . determining [Flynn’s] sentence’.

The problem appears to be, however, that those transcripts were obtained via an unacknowledged FBI wiretap. ‘Their release would have provided an extraordinarily rare look at the fruits of the government’s eavesdropping. Agents routinely listen to wiretaps of foreign officials, but they remain among the government’s most closely held secrets’ (nytimes.com here). The Supreme Court ruling that ‘presidential privilege for confidential communications that do not concern . . . sensitive national security secrets may be rebutted’ allows for the interpretation that these highly classified transcripts are covered by privilege.

Last week, at this late stage in his case—only the sentencing hearing is left—Flynn has fired his lawyers and hired a brand new team. The rumour mill immediately went into overdrive: talk of a pardon for Flynn covered the odd acre of newsprint. We can only await debvelopments.

To impeach or not to impeach—that’s the €64 question

Criminal prosecution exacts punishment; impeachment upholds the Constitution and prevents further assaults on it. Many Americans, but far from a majority, think President Trump has committed impeachable acts but are wary of impeaching without hope of removal. However, if there is an indication that severe damage to the Constitution will occur unless Trump is removed, the House must act, and then engage public opinion to pressure the Senate. (Rubin, www.washingtonpost.com)

More and more Democratic legislators and one brave Republican are making the same point, while others, including Speaker Nancy Pelosi, prefer to slow-walk the process.

The difference in reasoning between the Democratic slow walkers and those who call for the immediate start of the impeachment process is not about whether Trump should be impeached but is all about timing. There are obvious risks involved in leaving Trump in the White House until the moment is right to launch the ‘I’ word, even embattled on all sides as he is, fighting multiple court cases and held somewhat in legislative check by the Democratic-controlled House. But an impeachment attempt that falls in the Senate—as it will only if all Republican Senators, unpersuaded by the evidence presented to the House, vote along party lines—would be worse. Trump could go into the 2020 race as the hero who beat the libtards, the snowflakes, the fake news, Mueller, the FBI, and a ‘partisan’ House. In this context, Bill Clinton’s boost in the polls after the Republicans’ failed attempt to impeach him is focussing the minds of many Congressional Democrats.

In The New York Times, Michelle Goldberg offers a different take on the slow-walking process:

The point of impeachment is not to remove Trump before the 2020 election. It is to make clear, in the starkest possible way, why Democrats believe he should be removed. The remainder of his term should be consumed by a formal, televised presentation of all the ways he’s disgraced his office. It’s true that were Trump to be re-elected after such a reckoning, he might be even further unleashed. But were Trump to be re-elected in the absence of impeachment, it would still be seen as a vindication for him, and would leave Democrats humiliated by their excess of caution. (nytimes.com here)

She goes on to argue that ‘the notion that Republicans suffered a devastating rebuke as a result of the Clinton impeachment is overblown’, given that Republicans kept the House in the 1998 midterms and, in 2000, won the presidency, kept the House, and narrowly took the Senate, ‘giving them trifecta control of government for the first time in nearly half a century. Can this really be the cautionary tale that’s frightening Democrats from doing all they can to hold a lawless president to account?’

Should Nancy Pelosi heed the growing number of Democrats who are calling for an impeachment inquiry rather than the impeachment process itself, she would allow the House to continue with its multiple investigations, and see to it that ‘The remainder of [Trump’s] term is consumed by a formal, televised presentation of all the ways he’s disgraced his office’. Such a strategy reserves the impeachment remedy ‘for the very genuine possibility of a Trump second term, by which time the Senate will likely have shifted more in the Democrats’ direction’ as David Frum says in The Atlantic. It also liberates ‘their presidential candidates to campaign on the bread-and-butter issues that will mobilize and motivate less-committed voters, rather than obliging them to opine on the big existential question of impeachment and removal’ (theatlantic.com here). At the same time, in the background, the steady drumbeat of House investigations into his venality and incompetence (it’s hard to say which does more damage) will wear away at any residual support he has outside of his base.

All the Democrats have to do is not trip each other up. We can but dream.

This article was updated on June 10, 2019, to include news of Mike Flynn’s change of legal team.

23rd January 2019
Dr. Jeannette Boyne: former out-of-work actor, former working academic and Mellon Fellow, current contributing editor of leftbucket.com, born in Ballyfermot, raised in Birmingham, educated by Columbia (the university, not the country). The old cliché says that journalism is the first draft of history; as Jeannette sees it, the job of an online journal like leftbucket is to provide its first edit. View all posts by Dr. Jeannette Boyne →