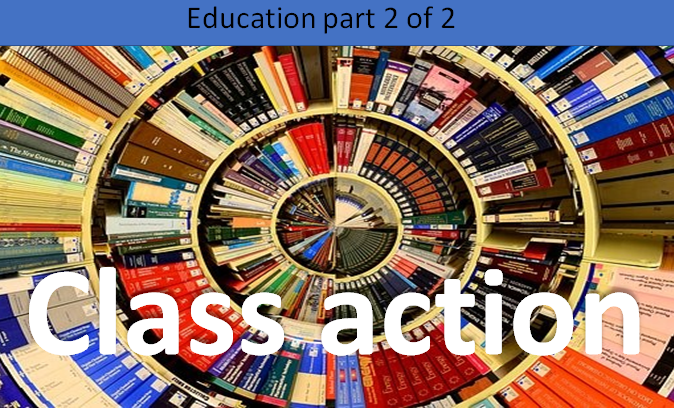 Irish teachers and parents are very fond of the Leaving Certificate. It has been our gold standard for educational achievement at second level for almost a century. And therein lies the problem: a lot has changed since 1924 when the Leaving Certificate was first introduced. Consequently, it is now expected to do what it was never designed to do—to prepare students for and measure their suitability for third-level study.

Demographics demand change. There is an ongoing increase in the level of Leaving Certificate participation and a concomitant increase in the numbers of students continuing to higher/further education. Consequently, our secondary schools are asked not only to complete the students’ general education, their original purpose, but also to prepare students for the next level. Assuming that the Junior Certificate remains as the measure of general education, the senior cycle could offer more specialised courses in which students are made ready for third-level study. To do that, the senior cycle has to be expanded to include subjects not currently taught at second level but that students may want to study at university—law, psychology, philosophy, or political science, for instance. Familiarity with the content of the course they are undertaking will facilitate

a smoother transition to university from secondary school.

By studying degree subjects before they commit to a three-year course, students can choose a course for which they are suitable, and that’s suitable for them. Under the current system, students have to decide on a university course and subsequent career choices before they have had any experience of university or, in some cases, the subject they’ve chosen. Students who discover some way into their first year that they’ve made the wrong subject choice have few good options: either continue and underperform or change subject and lose a year.

A modular Leaving Cert, in which courses can be taken serially and cumulatively, would allow for a more flexible pathway to third level. It would also accommodate the increasing numbers of non-traditional students preparing for study at third level who are juggling commitments to families, jobs, and other responsibilities in addition to their studies. The current one-and-done exam is an outdated model based on nineteenth-century pedagogical practices.

The requirements of third-level education demand change. Students need to learn the skills required to succeed at third level—finding new knowledge through research, assessing new material analytically, and presenting well-reasoned arguments for the accuracy or otherwise of evidence found there. To paraphrase Margaret Mead again, students heading off to university need to know not what to think, but how to think.

Current pedagogical models demand change. The passive classroom is increasingly being replaced by a participatory model in which students are encouraged to think through the subject for themselves. This style of teaching doesn’t fit well within the current system in which the emphasis is on learning a little about a lot of subjects rather than studying fewer subjects at greater depth and breadth. And it doesn’t fit well within a system in which all assessment depends on passing a final exam.

Exams only measure how well students perform on exams. Memorisation doesn’t need understanding but using that memorised knowledge does. A terminal exam measures shallow knowledge whereas project work demonstrates depth of knowledge—i.e. not only how well students know their subject, but how well they understand it and how well they can use what they have learned. Third-level study requires that students have that depth of knowledge; it requires that students have the skills to make use of what they know, applying it to what they are learning in order to understand new material.

Continuous assessment of coursework over at least the senior cycle will provide a far better picture of the student’s potential to succeed at third level. It’s extraordinary that students should spend 14 years in education—about three-quarters of their lives to that point—but that their academic future will largely depend on their performance on exams taken during two weeks in the summer of their eighteenth or nineteenth year. Continuous assessment both incentivises and rewards coursework; by spreading coursework in projects over the entire cycle, continuous assessment avoids the frantic attempt on the part of students to cram everything in during revision for a terminal exam.

And we’ve landed in the middle of a controversial row between the teachers’ unions and the last couple of Ministers for Education that has delayed a move toward greater use of project work. In this case, the teachers are right: teachers cannot grade their own students for certification. Only teachers know how subjective grading can be, no matter how hard we try. An upcoming article, Class in the classroom, demonstrates just one obstacle to objectivity: the extent to which our judgement can be affected by unconscious assumptions lodged in our subconscious that we may have forgotten and may not even agree with anymore.

The solution is simple: teachers grade work from other teachers’ students. Geographically distant schools can be paired anonymously, and teachers from each can grade a portfolio of work by students of the other. The graders will know nothing about the student or the school they go to apart from the work in front of them. Consequently, their subjective opinions concerning class, gender, ethnicity, student likeability, previous performance, and so on, won’t come into play.

Apart from the drawbacks of the exam itself, the points system can distort the process of choosing a subject to study.

Students who achieve maximum points on the Leaving Cert are encouraged, indeed pressured, to study courses that require maximum points and offer the greatest financial and social rewards—i.e. law or medicine. In this way, a potentially really good teacher, for instance, might become a mediocre doctor. Among those who achieved fewer points, we might find a potentially really good doctor becomes a mediocre teacher.

Ideally, if we are to retain the points system, points should be awarded not only for exam results but also for coursework—particularly coursework in the subject the student intends to study at third level. Even more ideally, we should move away from exams altogether and assess students on their performance across the entire senior cycle. Either way, points should indicate not only whether students are ready for study at third level, but how well they are likely to perform in their chosen subject.

After nearly a century, it should come as no surprise that our system of assessment could do with a shake-up. At a minimum, the senior cycle has to be turned around to face the future, to prepare students for third-level. Continuous grading across the senior cycle would provide a far better predictor of a student’s post-secondary performance than an exam; it would also allow teachers and students to strategise the best route to the individual student’s goal. As I’ve said before, well-prepared, informed students making informed choices should be our goal.

Coming up: Class in the classroom

Over half the population now graduates to third-level study. A majority of working-class students now complete the Leaving Certificate, and grant-aid is available for students from the poorest families to study at third level.

On the face of it, these factors add up to a more democratic spread of educational opportunity. But at a second glance, things don’t seem that different after all. The general population of students in Irish universities is still predominantly from the upper and middle points on the socio-economic scale. All other things being equal—intelligence level and Leaving Cert grades, for instance—students at the lower end of the socio-economic scale are still less likely to graduate to third-level study than their more affluent counterparts.