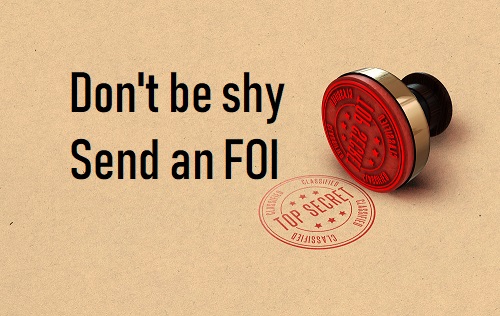 “…all information held by governments and governmental institutions is, in principle, public…”
– UNITED NATIONS  resolution 59 of the General Assembly,

In other words Freedom of Information (FOI) IS VERY IMPORTANT and vital to ensure the transparent operation of government. The aim of this brief article is to encourage everyone to be confident and assertive in questioning our offices of state. If there is information you need to access or facts you need to uncover there is a process in place called “Freedom of Information” which provides a route to the data you need.

A good definition of FOI is on the United Nations website www.un.org from which the opening above line was extracted and it states that:

EVERYONE is free to make an FOI request and the best place to find out how easy it is at A Beginners Guide To FOI (click on and follow the link) courtesy of one of Ireland’s greatest evangelists for Freedom of Information, an FOI celebrity on social media, journalist and academic, Ken Foxe. Ken is a lecturer at Dublin Institute of Technology where he teaches in the School of Media. He also works as a freelance journalist specialising in Freedom of Information, data journalism, and investigative reporting and can be seen contributing everywhere from Broadsheet.ie to RTE (where he once worked).

When Ken Foxe’s name is uttered in government buildings senior civil servants cringe. He has been very active over the last 10 years

in attempting to keep our governments accountable and transparent. Also, he has influenced many individuals and organisations to empower themselves and his online presence provides crucial information to allow citizens to protect their rights.  He is the author of two books ‘Snouts in the Trough: Politicians & Their Expenses‘ and ‘Revenge‘, a true crime book. He was winner of the TV3 Story of the Year Award for 2009 following a series of newspaper stories about political expenses, which led to the resignation of then Ceann Comhairle John O’Donoghue. He has a particular interest and expertise in the use of Freedom of Information and data for investigative reporting.

You will find lots more of Ken’s invaluable work on KenFoxe.com, TheStory.ie and on RightToKnow.ie of which he is a founder and director along with Gavin Sheridan (another FOI ledgebag). Ken is very active on Twitter where he posts as @kenfoxe – some say he infests Twitter. Certainly it is known that government officials break out in rashes or take to the bed when his name is mentioned in correspondence.

There is plenty of assistance available so don’t be reticent or shy if you need to FOI. A colleague of Ken Foxe in @RightToKnowIE and also, a renowned FOI guru, is solicitor Fred Logue. His interview with the @EchoChambersPod is an eye opener about government transparency, or more accurately, lack of transparency and can be heard on Fred Logue #RightToKnow . Do give it a listen, check out RightToKnow.ie, follow them on Twitter at @RightToKnowIE .

Freedom of Information is a right, is easy to do, should not be expensive so remember…

The absolute beginner's guide to using Freedom of Information in Ireland: written for members of the public & journalists that have never used it. Feedback welcome: https://t.co/UW6Yl4iu1e pic.twitter.com/HQbE7JUjBm