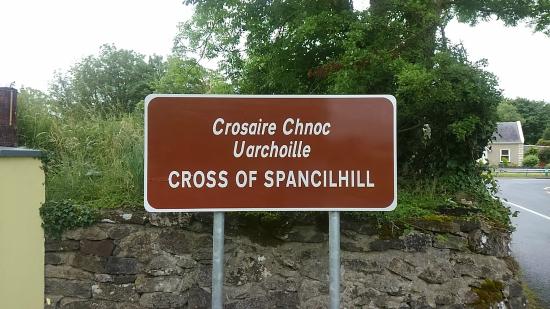 All the people and places in this poem are real. What we recognise today as a song, was originally written as a poem by 23 year old Michael Considine, in the full knowledge that he was mortally ill and that he would die far from home and far from his “first and only love” whom he would never see again.

We are deeply indebted to the great, and sadly late, Robbie McMahon of Spancilhill, Co. Clare for keeping the song and it’s stories alive and for sharing them with us. Indeed, it is just over 20 years since Robbie’s story of “Spancilhill” went viral on the internet with dozens of folk enthusiasts enthralled with posts on the Mudcat Cafe web site. The thread is still preserved there and you’ll find the link here –  https://mudcat.org/thread.cfm?threadid=4808#26478 – Rather than retell to tale, best to take a trip back in internet time and explore the experience as it unfolded at the time.

The story and the poem “Spancilhill” were preserved and cherished by Michael Considine’s nephew John. When Michael’s last letter home was received, with the poem enclosed, John Considine was only 6 years old.  The poem had been dedicated to him and, to honour the memory of his uncle, he learned and recited it often. Someone, we don’t know who, put the poem to music and made it into a song – and it became very popular.

Travelling the world set to music, over decades, “Spancilhill” changed with verses dropped and names swapped. The story of it’s rediscovery in its original form began in the early 1940’s when a a young Robbie McMahon learned the “song of his home place” from a neighbour who had transcribed the original. When Robbie sang the original version he got the blessing of John Considine, then in his mid seventies, saying he was “the only young fella who knew the proper song”.

Sadly, Robbie died in 2012 but right up to the end, Robbie shared his knowledge, love and passion for “Spancilhill” with music lovers from all over the world. Today, being the 23rd of June, please sing, remember and share this tragic, true story. Remember Michael Considine as his plight then is, shamefully, still the plight of many in this modern age.

Last night as I lay dreaming, of the pleasant days gone by,
My mind being bent on rambling and to Erin’s Isle I did fly.
I stepped on board a vision and sailed out with a will,
‘Till I gladly came to anchor at the Cross of Spancilhill.

Enchanted by the novelty, delighted with the scenes,
Where in my early childhood, I often times have been.
I thought I heard a murmur, I think I hear it still,
‘Tis that little stream of water at the Cross of Spancilhill.

And to amuse my fancy, I lay upon the ground,
Where all my school companions, in crowds assembled ’round.
Some have grown to manhood, while more their graves did fill,
Oh I thought we were all young again, at the Cross of Spancilhill.

It being on a Sabbath morning, I thought I heard a bell,
O’er hills and vallies sounded, in notes that seemed to tell,
That Father Dan was coming, his duty to fulfill,
At the parish church of Clooney, just one mile from Spancilhill.

And when our duty did commence, we all knelt down in prayer,
In hopes for to be ready, to climb the Golden Stair.
And when back home returning, we danced with right good will,
To Martin Moylan’s music, at the Cross of Spancilhill.

It being on the twenty third of June, the day before the fair,
Sure Erin’s sons and daughters, they all assembled there.
The young, the old, the stout and the bold, they came to sport and kill,
What a curious combination, at the Fair of Spancilhill.

I went into my old home, as every stone can tell,
The old boreen was just the same, and the apple tree over the well,
I miss my sister Ellen, my brothers Pat and Bill,
Sure I only met my strange faces at my home in Spancilhill.

I called to see my neighbors, to hear what they might say,
The old were getting feeble, and the young ones turning grey.
I met with tailor Quigley, he’s as brave as ever still,
Sure he always made my breeches when I lived in Spancilhill.

I paid a flying visit, to my first and only love,
She’s as pure as any lilly, and as gentle as a dove.
She threw her arms around me, saying Mike I love you still,
She is Mack the Rangers daughter, the Pride of Spancilhill.

I thought I stooped to kiss her, as I did in days of yore,
Says she Mike you’re only joking, as you often were before,
The cock crew on the roost again, he crew both loud and shrill,
And I awoke in California, far far from Spancilhill.

But when my vision faded, the tears came in my eyes,
In hope to see that dear old spot, some day before I die.
May the Joyous King of Angels, His Choicest Blessings spill,
On that Glorious spot of Nature, the Cross of Spancilhill.