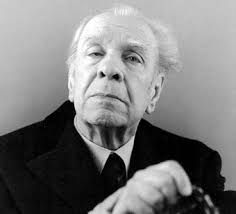 If a poem is a journey into an idea or a feeling, this feels like a brief but particularly unsettling one—at least at first. It’s a peculiar poem even for Borges. And the peculiarity doesn’t subside with re-readings; it swells, in fact, gathering into forceful waves that crash against interpretation and meaning—eroding those bastions relentlessly—without ever really breaking. The force is created by tensions in the poem that derive from a number of sources: word choice or register, imagery, and the odd brevity.

First, the poem contains a number of semi-obscure words (even to a native Spanish speaker). Some float like low clouds just above comprehension: vil (vile), lupanar (brothel), dinel (doorframe), cornamenta (antlers/horns), aquelarre (Witches sabbath); and others slip between meanings like loose rocks underfoot: rúbrica (marks/flaunts), charra (flayed, grotesque), mármoles (marble/marbles). Altogether, more than half of the nouns in the poem are rare or polysemic. For a short poem with little space for contextualization, that’s a lot. This remoteness of language seems at odds with the imagery, which references butchers and prostitutes (and witches)—the working class, that is, which is usually associated with plain speech not abstruse or rarefied language. This contrast—between form and content, as well as between the quotidian reality of the butchers and prostitutes and the language used to describe it—introduces one of the primary tensions of the poem.

Second, the poem begins with raw, crude, visceral imagery (including literal raw meat and viscera), like ‘brothel’ (in English also known, crudely, as a ‘house of flesh’ or ‘meat market’) which evokes nakedness; the blind cow’s head, flayed flesh. All are strong and even offensive (insulting to the street, in fact, says Borges). Despite the obscure language, this is an extremely visual poem. It brings to mind the paintings and films of German Expressionism after WW1: filled with bold images that evoke, yes, raw emotion and experience, intense and unmediated. Undressed—either by clothing or custom. Borges was deeply interested in this movement and elements of it appear here: shocking or even ‘scandalous’ images, the seductive but distasteful experiences of modern urban life; the naked body evoking primal emotion; angst; and violence.

Third, compared with the majority of Borges’s poems, this one is conspicuously short. And not just short, but ‘cut short’: the vowel-final ‘o’ in ‘ídolo’ feels . . . vulnerable, soft, or incomplete in contrast to the way in which a consonant-final word might feel here. As the roundness of the vowel sound is released by mouth like a (last?) breath, it leaves the speaker open mouthed, slack-jawed, as well. But, it’s not entirely unpleasant. The soft assonance between ídolo (in the Spanish version) and los mármoles (the latter of which also evokes, in one of its connotations, the roundness of a marble) gives a sense of balance, even if a little coldly delivered. The shortness and sense of interruption gives the poem a minimalist feel. There’s nothing superfluous: the butcher cut the fat, Borges cuts the lines. Like the raw images, these ‘truncated phrases’ (which Borges talks about in Horizontes) are also influenced by the Expressionist movement (and appear in the compact stories of Ficciones).

The hanging head of the dead cow is a fairly good clue that one of the themes of the poem is death. (I wonder, in fact, if the obviousness is even a little joke, given Borges’s critiques of metaphor in other works.) But considering the tension created by the word choice, the abruptness, and the imagery, I think that Borges is contemplating something else beyond death. This something else begins to emerge toward the end of the poem, specifically in the word, ‘marble.’ At least in English, this can be taken as a play on words. The white lines of fat that run through a cut of meat are sometimes called ‘marbles’; or, the meat itself containing those streaks can be called ‘marbled meat.’ Marble also evokes a headstone, again representing death.  And indeed, all of life is streaked with death, of others, and then ultimately of oneself.  ‘In the midst of life we are in death,’ as the Bible says. Borges uses this to wonderful, if somewhat disturbing, effect, in that the image joins together life (flesh), and death (marble) in the slab of beef. It’s a stunning symbol, and a stunning moment in the poem, when a sense of ephemera emerges from its opposite: thick, raw flesh.

The more times I read the poem, the more I wonder if it’s this symbolism that Borges wants above all to explore. The points above suggest that, maybe, yes. Symbolism, metaphor, mimesis, the linguistic study of semiotics—especially in Europe, where Borges was living when he wrote it—were relevant and pervasive themes of art and literature at the time (and before, after, now, and always). Contemplation of the distance between ‘signifier’ and ‘signified’ appeared in many genres (‘Ceci n’est pas un pipe.’). And in Borges, often. The remote language contrasted with raw imagery throughout this poem hints at it here. And in the last line most convincingly: With the distant majesty of an idol.

The imagery up to this point has been fleshy: immediate, brutal, and visceral, with only strands of remoteness coursing through, marbling, that flesh. Now, however, the marble overtakes the flesh, leaves that realm, and transforms into an idol—something made completely of marble. In so doing, it becomes ‘remote,’ and ‘majestic.’ The difference between the realm of the flesh and the realm of stone reflects the distance between signified and signifier—between living and writing about the experience of living. Living is immersive, un-self-conscious, the gaze ‘blind’ (like the cow’s) to one’s living, one’s being in the world. Writing about being, about existence, however, is detached, self-aware, reflective, esteemed like an idol (if somewhat coldly). It is the difference between subjectivity and objectivity, another theme that runs through Borges’s work. The central image of the marbled meat, which combines these realms—flesh and stone, living and writing, looking out and looking in, subjectivity and objectivity—seems to find/construct the ‘truth,’ or ‘reality,’ or ‘meaning’ not in one or the other but somewhere in between. It’s suspended, uneasily, precariously, like the cow’s head, between the self and the world ‘outside.’ Truth and meaning are ‘marbled’; not binary. Whatever (a) meaning is, it contains the opposite of that too. Sacred and profane. Light and dark. Young and old. Male and female. Living and dead.