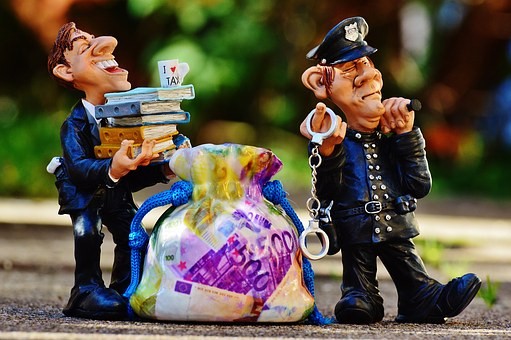 Before he left office, Michael Noonan kicked off a favourite game of his, the never-ending row over tax cuts vs increased spending. As Cliff Taylor said in the Irish Times,

At a time when much public debate was focussed on the need to improve public services in areas such as health and boost key investment in housing, [Noonan said] ‘It is important that in the discourse of the appropriate amount of tax and spend in our economy, the views of those who contribute the majority of the taxation are heard’ (irishtimes.com here).

Who are these people who ‘contribute the majority of the taxation’? Isn’t that just ‘us’? Are Noonan’s ‘majority contributors’ in any way related to the ‘people who get up early in the morning’? Because, despite Leo Varadkar’s insistence that he was being inclusive when he said that, both of these phrases are dog-whistles to the ‘respectable’ middle and professional classes, who are apparently wearied by the burden of carrying the rest of us.

According to Varadkar, ‘Taxes should be low, simple and fair. High tax rates make it harder to attract skilled, qualified and

talented people home from London and from other countries, and it is one of the push factors that cause our homegrown doctors, IT professionals, and others to take opportunities elsewhere’ (www.independent.ie here). Yes, Leo, it’s all about the personal tax rate—nothing to do with a chronically under-resourced health service, an increasingly under-funded education system, the stalled roll-out of broadband, a housing policy that leaves over eight thousand people homeless—more than three thousand of them children—and encourages the spiralling cost of housing to rent or to buy . . .

Let’s get this straight. Everybody in Ireland pays taxes—either directly or indirectly—including the homeless. Progressive income taxes have been increasingly offset in recent years by a Thatcherite shift toward regressive indirect taxation (bin charges, property taxes, water charges, VAT[1]) as fixed charges or fixed percentages. Consequently, the lower your income, the higher your tax rate because those charges represent a higher percentage of lower incomes, while effectively reducing the tax rate paid by higher earners.[2] In addition, indirect taxes increase prices—shops and commercial enterprises pay those taxes too and pass them on to their customers. This double bubble means that the reduced disposable income at the lower end of the economic scale has even less spending power.

To add insult to injury, we taxpayers, direct and indirect—including the homeless and the uninsured—from our place on the waiting list for treatment or from a trolley in a hospital corridor, get to subsidise private hospitals to which the majority of us have no access, and that allow the higher-income earners with health insurance, including TDs, to skip waiting lists, improve their recovery rates and times, and take increasing advantage of preventative medicine.

In 2006, then Minister for Health, Mary Harney, said that the situation in A&E units across the State was a ‘national emergency’. In the twelve years since she made that declaration, the emergency became a crisis and the crisis became a catastrophe, and successive governments have continued to shake their heads and wash their hands of responsibility by calling for more reports. In January 2018, we have reached yet another record-breaking number of patients on trolleys before the anticipated flu epidemic hits us.

According to the Irish Association of Emergency Medicine,

It is deeply disappointing that in spite of two ‘Emergency Department Task Forces’, multiple reviews and consistent commentary on the situation, nothing has changed. Indeed, the problem has been allowed to worsen. Yearly ‘plans’ and ‘Winter Initiatives/Plans’ have failed to address the issue and the HSE continues to condemn further patients to this very unsafe situation day in, day out.

Based on well-conducted Australian studies of excess mortality as a direct consequence of ED crowding, some 300 to 350 of our citizens die avoidably every year as a direct result of the failure to address this issue. If such a large number of preventable deaths occurred in any other environment, those responsible for or with oversight responsibility for the problem would be held to account and removed from their roles. (www.iaem.ie here)

We give tax breaks to landlords, but not to tenants. Speaking of his last budget, Michael Noonan felt it was ‘an appropriate time’ to revisit taxation in the context of the housing crisis. Unbelievably, this ‘revisit’ meant that landlords can now deduct 80 percent of the interest paid on borrowings on a rental property, up from 75 percent, with ‘full interest deductibility’ expected by 2021. Landlords who let their property to social housing tenants for a minimum of three years can already deduct 100% of interest paid.

As of this year, tenants can claim no tax relief. (http://www.citizensinformation.ie here)

That is, rather than spend money on building houses, our government incentivises landlords to rent out their properties by putting taxpayers’ money directly into their pockets, and our elected representatives sit back, look sad, and scratch their heads as tenants at the bottom of the pile are squeezed out of their homes and into homelessness. It should come as no surprise to anyone that one in four TDs (42 of 158 deputies, 26.5%) and almost one in three Cabinet Ministers (six out of nineteen, 31.6%) is a landlord.  The highest proportion of landlords sit on the Fine Gael benches—18 of its 50 TDs (36%) have an income from renting out property.

The primary purpose of the class system, like bureaucracy, is to guarantee its own continuance. Plus ça change.

[1] A value-added tax should not be imposed on the consumer—who adds nothing to the value. In fact, by the act of buying a product, the consumer reduces its future sale price.