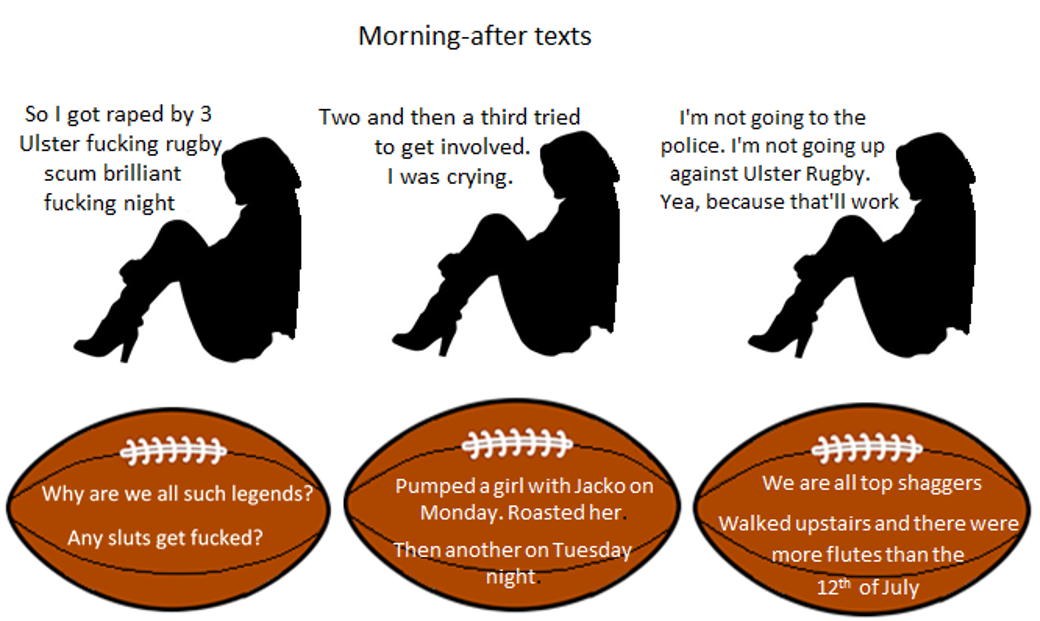 The right to rape

The recent trial of four young men in Belfast in which they were acquitted of charges relating to the rape of a then nineteen-year-old student (leftbucket.com here) showed up attitudes toward women on the island of Ireland that we had hoped had long ago disappeared down the u-bend of history.

The young woman complainant left a party at the house of one of the accused crying hysterically and bleeding from a tear in the wall of her vagina. In a series of triumphalist texts exchanged between the accused and their friends on the following day, those young men referred to women collectively and indiscriminately as ‘sluts’ and ‘brassers’ and to themselves as ‘legends’ and ‘top shaggers’. They showed no remorse or shame in those texts or during their trial—despite the fact that one of them had accompanied the woman home in a taxi and that, throughout the journey, she ‘was crying-stroke-sobbing’ in the words of the taxi driver. They demonstrated no understanding at all of the concept of consent; in its place, they offered a sense of entitlement and an arrogant belief that consent was forthcoming over their victim’s repeated refusal. All four were acquitted.

In April of this year, Clíona Saidléar, Executive Director of the Rape Crisis Network Ireland, wrote that

rugby pundit Willie John McBride on an RTE radio programme described sexist, disrespectful and violent behaviour by male sports stars as mere silliness for which no young man should be held accountable. Is it any wonder our young boys think threats to rape are a joke? (rcni.ie here)

Is it any wonder that two members of both the Ulster rugby team and the all-Ireland national team and their friends believed that their behaviour on that night was not only acceptable but something to boast about?

Here in the Republic the perpetrator in the infamous X case, convicted of raping a fourteen-year-old girl, was sentenced to fourteen years in prison reduced to four on appeal. He served three. After his release on May 31st, 1997, he passed garda vetting and was given a licence to drive a taxi.

At the end of July [1998], a member of the Gardaí recognised the man as a person having a conviction and reported the matter to the carriage office. As a result, the man was called in to see the Chief Superintendent in charge of the Traffic Department on August 25th. However, [a] spokesman said that the man was allowed to continue to operate as a taxi driver, as he had been doing so for a year and had no unfavourable reports. Psychological reports had also been favourable. The spokesman said that because of this, it was considered that he had a constitutional right to earn a living. (rte.ie/news here)

This finding was made despite a second fourteen-year-old girl, a passenger in his taxi, having accused the man of a sexual assault. In that context, the ‘no unfavourable reports’ statement is hard to justify. Her complaint, according to RTE in the same news report, was ‘under investigation, and the man’s taxi licence [was] being reviewed but had not been revoked.’

And incidentally, what psychological reports? As I understand it, such reports are not standard in reviewing applications for a taxi licence—so why were they sought in this case? Does the fact that

psychological reports were sought mean that the gardaí and the Carriage Office were aware before July 1998 that the man in question was a convicted rapist? Or were the reports sought and received between the end of July and August 25th of that year? And did a psychologist really find that this man, a convicted child rapist, was fit to drive a taxi?

More than a year later, on September 22nd, 1999, the Irish Independent reported that

Gardai yesterday interviewed the 50-year-old married man as part of a review into his suitability to hold a public service vehicle (PSV) licence.

The man was told by the gardai they had now decided to revoke the licence.

In March 2002, he was sentenced to 42-months in prison for the kidnap and sexual assault of the second young girl.

It is established law that a child cannot consent to sexual activity. Full stop.

In the Republic of Ireland, however, the ‘honest belief’ defence supersedes all of that and allows that where a man believes consent to be forthcoming, no matter how unreasonable that belief may be, he cannot be convicted of rape. In 2016, The Supreme Court ‘confirmed that the test to be applied . . . is not what a reasonable man believed as to the presence of consent, but rather what the individual accused actually believed.’ Therefore, an ‘honest, though unreasonable, mistake that the woman was consenting is a defence to rape’ (DPP v C O’R [2016] 3 IR 322).

The ‘honest belief’ defence, which ‘allows the accused to continue their illogical process of forming [unreasonable] beliefs and risks them engaging in the same behaviour again’ as Minister Katherine Zappone has pointed out, is currently being assessed by the Law Reform Commission. As a part of that assessment the Commission recently released a paper, Knowledge Or Belief Concerning Consent In Rape Law, that says ‘If one of the purposes of criminal law is to prevent harm and provide retribution where harm is caused, it arguably does not follow that inadvertent or careless actions should be ignored, particularly where the harm can be easily avoided by a simple inquiry.’ That is to say, the ‘honest belief’ defence overlooks the harm done to the survivor and allows sexist stereotypes to persist as ‘implied consent’.

The honest belief defence arguably legitimises and thus bolsters rape myths and sexist stereotypes that lead to victim-blaming attitudes and perceptions. These myths could include that dressing in a so-called provocative fashion invites violence; or if a woman did not fight back, it was not rape; or if two people have had sex with each other on a previous occasion there is ‘implied consent’. . . . It is arguable that in a situation as intimate and mutual as sexual intercourse, where the whole legality of the activity is premised on consent, there is a moral obligation to take the minimal step of ensuring that it is consensual. . . . Excusing the failure of the accused to give minimal thought to consent at all, to the extent that the woman could be said to be completely objectified, is arguably contrary to the goal of protecting the bodily autonomy of women. (http://www.lawreform.ie here)

The Commission is considering a lesser offence of ‘gross negligence’ in cases where the man had an honest but unreasonable belief that consent was forthcoming. Under current legislation, the ‘honest belief’ defence need not be reasonable, and no objective criteria need be applied. The paper asks whether a recognition ‘that engaging in non-consensual sexual penetration without having a reasonable ground for believing that the woman consents is a significant wrongdoing’ and is calling for submissions from the public.

Clearly, the Commission’s consideration relates only to penetrative rape. It’s crucial that submissions from the public demand that the ‘reasonable honest belief’ criterion be extended to other sexual offences.

The Rape Crisis Network Ireland, in their report, Hearing Every Voice—Towards a new Strategy on Vulnerable Witnesses in Legal Proceedings, offers a list of suggestions that need to be considered in new legislation both generally and specifically in relation to rape, including

The use of pre-recorded evidence and the giving of evidence by video link will be controversial because it appears to deny defendants the right to confront their accusers face-to-face in a courtroom.

Our criminal justice system is based on the premise that face-to-face live evidence at trial is the best evidence which can be obtained,’ said Caroline Counihan BL, RCNI’s Legal Director. ‘Modern psychological research does not support this conclusion, particularly since the advent of high resolution pre-recorded video and video-link solutions.’

‘Pre-recording a Garda statement soon after a complaint has been made maximises the potential of the witness to recall, fully and accurately, what happened, to give his or her best evidence and to help minimise the risk of secondary traumatisation by reducing exposure to the adversarial criminal justice process itself,’ she said. ‘In our view, it is time that the limitations of the live evidence only approach—often months or years after the alleged crime took place—were addressed.’

As Clíona Saidléar points out, ‘With the Belfast trial we saw how difficult the system can be on the witnesses . . . We know that we can make it better and that vulnerable witnesses can have a less traumatising experience in giving vital evidence.’ The complainant in that case was subjected to eight days of aggressive cross-examination by barristers for each of the four defendants.

Stronger, individually tailored protections will help ensure the best evidence is obtained, benefitting the criminal justice system as a whole. . . . The system of giving live evidence, often under arduous cross-examination, does not work well for many vulnerable witnesses because their voices are not heard as they should be. It does not work for the whole community either because it means that fewer perpetrators are held accountable. . . . If pre-recorded statements and examinations are to become a fair and effective alternative for vulnerable witnesses, it is vital that their introduction is underpinned by new statutory provisions regulating pre-trial hearings and provisions governing disclosure. (rcni.ie/pre-recorded-direct-evidence-cross-examinations-alternatives here)

Separately, Tom O’Malley, NUI lecturer in law, has been asked by the Minister for Justice, Charlie Flanagan, to evaluate how rape cases are conducted in the Republic. Among other matters, he will consider how cross-examinations of complainants are conducted and suggest what further protections can be offered to victims of sexual assault. He will also consider whether special training should be given to the gardaí and members of the court.

How are Irish women doing now?

The low level of reporting cases of sexual assault (see Garda statistics table) can create a false complacency, but as a country, Ireland has no right to be complacent.

Let’s not congratulate ourselves just yet.

This article was originally posted on 15th August, and reposted on 31st August, with minor editorial changes.