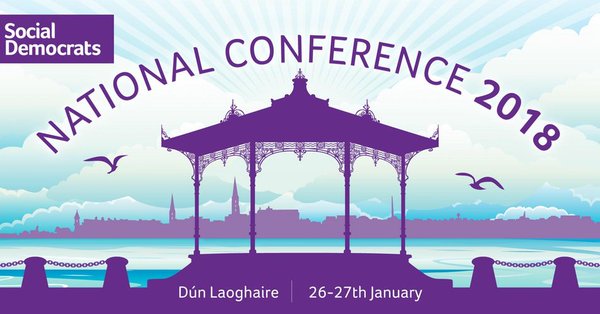 Mainstream media didn’t give the Social Democrats National Conference much attention, but journalist and author Philip O’Connor gave his account of the event on Twitter. To say it was glowing would be an understatement. For your convenience, it is reproduced below but you should follow the link at the end of the post and see it on Philip’s Twitter account @philipoconnor—share it and like it if you were there and agree with his observations.

‘Hundreds of clever, funny, energetic, like-minded people gathered here and discussed innovative, fair-minded policies that would lead to a better Ireland for all.’

‘It can be easy to go home after something like this and just let that energy fade away, but this time I think these people have understood the power of their own ideas and the necessity of talking to those around them about them.’

‘As I said on Saturday morning, whether they know it or not, the Irish people are social democrats—we do for each other what the state does for its citizens elsewhere.’

‘We house and clothe and feed, we care for the sick and people with disabilities, we mind children and grandchildren, all invisibly—ours is a shadow social democracy.’

‘So to those who were here—spread the word. There is a real alternative to the career politicians of the past who put themselves and their parties before their citizens.’

‘To those who weren’t here but who are tired by the same faces telling the same stories, and whose only evidence for their policies is the latest poll numbers, have a listen to them.’

‘As one woman put it to me here: “After the crash, I have nothing—no inheritance to leave my children. This is the only thing I can give them.’ A better, fairer Ireland would be some legacy, wouldn’t it?” ’