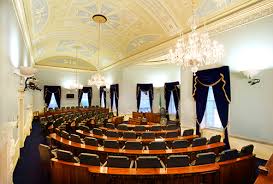 What is the Senate good for? Ideally, in a bicameral legislature, each house acts as a check and/or balance to the other. In our case, however, there is no check, given that the balance is well and truly tipped in favour of the Government of the day. The Taoiseach gets to nominate eleven Senators, which is a nice head start, but it’s hardly necessary: even though all Dáil bills need the approval of both houses, if the Senate rejects them, the government can ‘deem’ them to have passed anyway (after a maximum 180-day waiting period).

The Senate is consequently a metaphor for and a monument to a massive democratic deficit. To abolish it, however, would be to copper-fasten the deficit, while meaningful reform could transform it into a democratic dividend.

So, let’s get rid of the bathwater, hold on to the baby, and redesign the bathtub. We’ll have to start by throwing out the current Senate and all its occupants. Ignore the fingernails clinging to the door-frame, reassure them that some of them may be back, and close the door quickly.

It would clearly be redundant to elect representatives for the new Senate on the same constituency basis as we elect the Dáil. We need to capture the same people from a different perspective, as it were, animated by a different set of issues. One obvious solution would be to elect Senators on a city- and county-council basis; two Senators per council would make up a 62-member Senate.

Elected on local issues, Senators would carry the local voice to the national forum. Traditionally, TDs elected to the Dáil on local issues end up spending their time polishing the highly-polished back benches of the Dáil. The occasional stand-outs stand out because they are occasional. Tony Gregory would now be the answer to a question on a North Dublin pub quiz had it not been for Charlie Haughey’s need for a vote to complete an attempted power grab in early 1982. It almost worked: the ‘Gregory deal’ as the Irish Times puts it, would have seen ‘the face of a deprived area of the north inner city  . . .  transformed’.

The written agreement included commitments to nationalise a 27-acre site in Dublin Port and Clondalkin paper mills. A total of £4 million was to be allocated to employ 500 extra people in the inner city, while 3,746 jobs were to be created over three years.

State funding would be provided to build 440 new houses in the constituency and another 1,600 in the rest of Dublin. (irishtimes.com here)

But Haughey lost power that December and the deal was off.

It’s a sorry indictment of the tragic farce of Irish politics that that same offer—updated only to allow for neo-liberal levels of inflation—would win an election today, more than 36 years later.

It’s even sorrier that we still conduct much of our national political activity using the same system of horse-trading by which Haughey ‘bought’ Gregory. This is demeaning to all parties concerned, to the state, and to democracy itself. Giving a voice to those representatives sent to Dublin to represent local issues would be a move away from that horse trading.

The next question is, do we need more public representatives? And the answer is, not really. We’re already over-represented compared to our neighbours: Ireland has one TD for every 27,500 citizens, the UK one national representative per 91,500 and France one per 105,000. Adding 62 more national representatives here might be over-egging the pudding. And in Irish politics, less is often better than more. On the other hand, we could leave empty the Dáil seats vacated by the movement of locally-elected former backbenchers to the Senate, where they can do the state some service. This would give us a Dáil with 104 members, a Senate with 62 members, and a system in which all 166 still vote on each piece of legislation.[1]

So that this new Senate doesn’t simply become another talking shop ‘up in Dublin’, Senators could simultaneously be members of the city or county council they represent—so that not only do they carry the local voice to the national forum, they also bring the national voice back home, and devolve power away from the centre.

Such an arrangement would require a radical overhaul of the local government system. More on that later.

[1] Any reduction of Dáil seats to fewer than 153 would require a referendum.