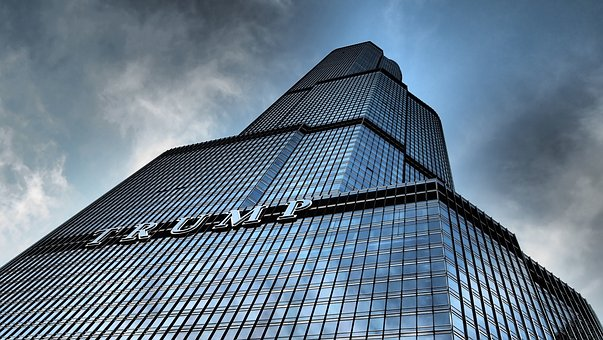 Throughout the 2016 election campaign, Donald Trump ran on the premise that, as an experienced and successful negotiator, he would make America great again. He promised he would bully China into letting the US win the trade war, though his hotels were stuffed with furniture, bedding, cutlery, and silverware with ‘Made in China’ labels. He promised he would bully multinationals into bringing jobs back to America, even though Trump Vodka was manufactured in the Netherlands, Donald J Trump eyeglasses, ties, and suits were made in China, and his shirts have been manufactured in Bangladesh, Honduras, Vietnam. And, of course, China.

And even though he wrote on the Trump University blog: ‘We hear terrible things about [how] outsourcing jobs . . . is contributing to the demise of American businesses. . . . But it is not always a terrible thing’—if it helps the bottom line, presumably.

He promised he would bully North Korea into giving up their nuclear ambitions; in response, North Korea sent two missiles over Japan and threatened Guam, claim to have exploded a hydrogen bomb, and have recently tested an intercontinental missile that can allegedly reach any part of the US. The current slight thaw in North/South Korean relationships has thrown him off his bullying, name-calling game—sufficiently, it appears, for him to agree to meet Kim Jung Un at some unspecified time in the future.

He promised he would bully Congress into legislating according to his command—demonstrating his apparent ignorance of the American system of governance in which the job of the other two arms of the US Government, the Judiciary and the Legislative, is designed specifically to prevent the Executive branch from behaving like a dictator. That same ignorance led him to think that he could bully the courts as well—insisting, for instance, that the judge in a case against him should recuse himself because he was of Mexican descent. He later settled that case (the fraud suit brought by former students of Trump University) for $25 million.

Trump, the self-proclaimed outsider, promised to ‘drain the swamp’ in DC, and in particular to drain it of the swamp creatures from Goldman Sachs, who, he claimed, owned Clinton. He subsequently filled his Cabinet with multi-billionaires, Goldman Sachs alumni, and other swamp dwellers who really know how to milk the freebies—like eschewing commercial airlines in favour of the government jet at a cost to the taxpayers of about $45,000 an hour. Goldman Sachs graduate Steven Mnuchin, Trump’s Treasury Secretary, even felt he was entitled to take the government jet on his honeymoon tour of Europe. Being fabulously rich apparently means never having to spend your own money.

Trump’s plan—that as CEO of Trumpamerica Inc., he would assume absolute power and bully everybody into doing what he ordered—has been frustratingly (for him) unsuccessful. He has only managed to see one Bill through the Congress, even with a Republican majority in both houses. The problem is that Trump doesn’t have an agenda, he has an ego. The nearest thing he has to a political idea—to salve his ego by obliterating Obama’s legacy—has become an obsession.

Under the dead hand of the now-banished Steve Bannon, Trump’s scorched earth policy toward all things Obama, coupled with the long-time Republican ambition for small government, has morphed into dismantling the State from within, and doing from the inside what nobody could do from the outside—gutting the American Dream.

His appointment of Scott Pruitt, climate change denier and enthusiastic fan of fossil fuels, to run the Environmental Protection Agency was motivated by this poisonous animus: Pruitt, who in the past has repeatedly sued the EPA for refusing to let him pollute, from day one has been gleefully rolling back Obama-era environmental protections. Kathleen Hartnett White, Trump’s nominee to be the White House senior adviser for environmental policy, in 2016 described the belief in climate change as the ‘real dark side of . . .  paganism’.

His appointee for the head of the Health and Human Services Department, Alex Azar, is the former CEO of the American arm of drug giant Eli Lilly , one of the biggest of the big pharmaceutical companies. Trump promises that Azar will oversee a reduction in drug prices; during his tenure at Eli Lilly, the price of their insulin product, Humalog, increased by 300%—not because the production costs had increased, but just because they could.

His choice as head of science at the US Department of Agriculture, Sam Clovis—a former loud-mouth talk radio host and another climate change denier—has no background in agriculture and no background in science either, despite a Congressional rule that the role must be filled ‘from among distinguished scientists’. Clovis eventually declined to accept the job; apparently, hubris does have a limit, after all.

One of Trump’s first acts as President was to appoint the most anti-public education person ever to lead the Department of Education. Betsy DeVos has called public schools a ‘dead end’ and bankrolled a private school voucher measure in Michigan that the public voted down by a two-to-one ratio. When that failed, she used her millions to elect legislators who then did her bidding by slashing public school budgets and spreading unaccountable for-profit charters across the state. The result? Nearly half of Michigan’s charter schools now rank among the bottom of U.S. schools, and Michigan dropped from 28th to 41st in reading and from 27th to 42nd in math compared with other states—a seriously important drop in standards.

Having defunded, destabilised, and demoralised the public education sector in Michigan, resulting in lowered standards and outcomes, she wants to apply those same strategies nationally, promoting voucher programmes that allow the hijacking of tax dollars from the public education system for removal to the private sector.

Not content with proposing a budget that ‘takes a meat cleaver to public education’(time.com here), DeVos is also busy rolling back guidelines on discrimination and neutering her department’s civil rights office.

Unsurprisingly, she and Attorney General, Jeff Sessions—who was twice turned down for a judicial appointment because of his racism—are ‘said to be at the tip of the spear of Trump’s illiberal agenda’ (the guardian.com here).

I don’t think the hackers, troll farmers, and their alleged paymasters in Moscow could have believed their campaign would be this successful. They just wanted to get an idiot who is heavily indebted to them into the White House.